Short Easter Bible Verses: It is good we understand the verses that mention the death and resurrection of Jesus.

In the Old Testament prophets like Isaiah and Amos foretold the birth and death of Jesus. Even King David had the faith that a King greater than him would come. Throughout the bible, the importance of Easter is mentioned. The death and resurrection are the basis on which the new church was founded. Christianity would not have come to pass without Jesus, He is the source of our hope for life after death.

The significance of Easter was put in place by God from the beginning of time when Adam sinned in the garden of Eden.

Reading below short bible verses for Easter will inspire you to search more for the scriptures to understand the great significance of Easter.

Then he released Barabbas to them. But he had Jesus flogged, and handed him over to be crucified. (NIV) 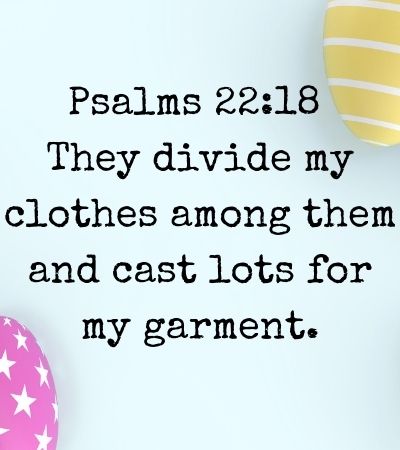 Even my close friend, someone I trusted, one who shared my bread, has turned against me. (NIV)

“In that day,” declares the Sovereign Lord, “I will make the sun go down at noon and darken the earth in broad daylight. (NIV)

They divide my clothes among them and cast lots for my garment.

Read: Easter Quotes from the Bible

25 Jesus said to her, “I am the resurrection and the life. The one who believes in me will live, even though they die;

When they came to the place called the Skull, they crucified him there, along with the criminals—one on his right, the other on his left. (NIV)

He was despised and rejected by mankind, a man of suffering, and familiar with pain. Like one from whom people hide their faces he was despised, and we held him in low esteem. (NIV)

If you declare with your mouth, “Jesus is Lord,” and believe in your heart that God raised him from the dead, you will be saved. (NIV) 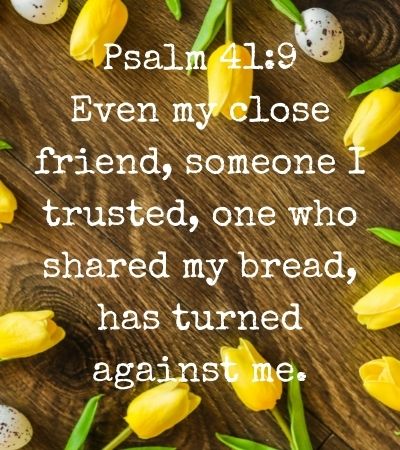 Dogs surround me, a pack of villains encircles me; they pierce my hands and my feet.  and cast lots for my garment.

15 and asked, “What are you willing to give me if I deliver him over to you?” So they counted out for him thirty pieces of silver.

16 From then on Judas watched for an opportunity to hand him over.

And if the Spirit of him who raised Jesus from the dead is living in you, he who raised Christ from the dead will also give life to your mortal bodies because of[a] his Spirit who lives in you. (NIV)

For Christ also suffered once for sins, the righteous for the unrighteous, to bring you to God.

And he died for all, that those who live should no longer live for themselves but for him who died for them and was raised again. (NIV)

But he was pierced for our transgressions, he was crushed for our iniquities; the punishment that brought us peace was on him, and by his wounds, we are healed. Praise be to the God and Father of our Lord Jesus Christ! In his great mercy, he has given us new birth into a living hope through the resurrection of Jesus Christ from the dead, (NIV)

But your dead will live, their bodies will rise—let those who dwell in the dust wake up and shout for joy—your dew is like the dew of the morning; he earth will give birth to her dead. (NIV)

Seeing what was to come, he spoke of the resurrection of the Messiah, that he was not

abandoned to the realm of the dead, nor did his body see decay. (NIV)

Exalted to the right hand of God, he has received from the Father the promised Holy Spirit and has poured out what you now see and hear (NIV)

I want to know Christ—yes, to know the power of his resurrection and participation in his sufferings, becoming like him in his death, and so, somehow, attaining the resurrection from the dead. (NIV)

The God of our ancestors raised Jesus from the dead—whom you killed by hanging him on a cross. (NIV)

Christ redeemed us from the curse of the law by becoming a curse for us, for it is written:

“Cursed is everyone who is hung on a pole.” (NIV)

29 When they had carried out all that was written about him, they took him down from the cross and laid him in a tomb.

30 But God raised him from the dead(NIV)